What follows is an unedited excerpt of a much longer short story. I hope you enjoy it.

The soft texture of the tiny blanket wrapped tightly around the sweet newborn. It was unfortunate the newborn was an orphan. The young woman holding the infant looked across the room. “Everything is done. You’ll be safe little one. No one knows about you, except me.”

The tiny newborn slept soundly as the woman tucked the baby into a small shoulder bag. She placed a loose blanket over the top, and a small bound book at the baby’s feet. She then carefully laid her data tablet over the top, in case someone should open the bag on her way. Once she was confident the baby was hidden and resting, she made her way out of the otherwise empty room.

She walked through a crowd of people beginning the investigation. She knew they wouldn’t notice her leaving. Most of them were assessing the crime scene. They had already interviewed her and cleared her to leave. Her bag had been investigated. There was no reason for her to be stopped.

Just before she steps off the raised ground, onto a small waiting hover board, Detective Kaplan called her. She turned to face him, knowing anything she did would be scrutinized if she didn’t. “Yes, Detective?”

“Just wanted to thank you for waiting while we get this started. I know you’ve been at work for a long time today and your patience made a huge difference.”

“Just catch the person who did this. It should never have happened. They are the sweetest couple ever. They so badly wanted the baby.”

Kaplan leaned over and wrapped his arms around her shoulders. “I promise, Miss Ky, we’ll find them.”

Ky nodded, sniffled, and responded, “I know. Please tell me when you do.”

She nodded, stepped on to the large waiting hovering board. “I’m available if you have more questions.”

The board lifted from the ground and with a little urging she moved higher into the air towards the higher city. Getting home and taking this baby to safety had to be the first step. What she would do next she would figure out later. As the hover board continued higher, she was grateful for her hybrid genetics prepared her for the higher elevation without an oxygen mask.

Once she entered the Doesi realm of the city, she navigated through the unused side streets to her home. Her bag began to move as she used her palm print to open her door.

There have been many changes in the way social media affects our efforts. I’m sure you’ve seen the times you have visited a website and saw something you thought was interesting, only to later log into Facebook and see it pop up in your newsfeed. This is Facebook putting tracking cookies in everything that is attached to them. I realize this makes sharing inconvenient. I apologize for that. I am looking for alternative methods that will make or integrate sharing options in a manner that is both positive and secured. Please feel free to offer suggestions in the comments.

Depression is my greatest enemy. From the time I was very young, I have had to combat depression in one form or another. Often it wasn’t severe. It wasn’t all encompassing. It wasn’t function halting, until it was. Over the years my depression, likely triggered both by life events and by a condition called PMDD, it deepened and grew. While it never became an all the time kind of depression, it did get bad enough – at times – to trigger suicidal thoughts. When in that state, I self isolate. Like countless other people who deal with this issue, it is a difficult place to climb out of alone. As a single parent, it is a difficult place to allow yourself to linger in too, which really only cycles the whole process.

There have been times, like during post pardum (PPD), that I took medicine for treatment. There have been other times that I did not. The best treatment I have honestly found is exercise and productivity. That sounds so counter-intuitive for someone who’s feeling like there’s nothing to move for, good to think about, to dream about. It’s likely an odd thought for those who don’t have someone to keep alive for. I’m grateful that I do.

The worst bout of depression I ever had lasted years. It was debilitating. It limited my ability to do anything except care for my children, and honestly, that didn’t go as well as I wanted it to. I would lay in bed some days only getting up to feed my babies, go to the bathroom, and pray I make another day. I struggled during those times to see a reason to keep on keeping on. Work suffered. We became homeless. The whole process showed me that those I loved would abandon me, as a person, when I had nothing left to share. I’m grateful we have left that behind a long while ago.

Feeling isolated, alone, and deceived should have been enough to justify ending it all. My amazing kids kept me from living in that state of mind. I have worked hard to leave all of those emotions in the past, even cutting ties with those who helped fuel it. Recently, I’ve been reminded about the cyclic nature of life. For the last few months, life has been one thing after another until the depression couldn’t be ignored any longer. It put me down. The chaos left me wondering why and how about nearly everything.  I could list to final trigger points or the ones that piled up before it, but that wouldn’t reach the goal of this article. The point is that I have begun to focus myself despite the depression. For those who may be going through it, it’s not easy. It is possible.

Each time we do something despite not wanting to even open our eyes is a victory over the enemy. Each time we achieve even a minor goal, like writing a few hundred word blog post, it is a victory over the enemy. Victories might be the only thing we can list. That won’t change the fact we can list them. Some days the only victory we have is making it to tomorrow. Don’t take that from yourself. That’s a huge victory.

Reaching out to resolve a depressive episode isn’t easy. In many cases, it’s not even possible. This is where it is important to make sure you know people who understand you deal with severe depressive episodes. They will notice when things change. Yes, even if you’re hiding it well, they will notice. (Although, honestly, if you have to put that much effort into hiding your depression and you’re doing a good job, you can add it to your victory column because there’s a lot of effort going out that you didn’t know you had to give.) A friend who notices will know to say something or make an appearance without notice. In the end, they’ll also be there to help you find your way back to the surface.

Now, I’m going to badly segue into something more specific. PMDD or premenstrual dysphoric disorder is a beast to contend with. This condition can affect any woman of menstruation age and has a cousin who’ll be active during menopause. When you do a search for it, you’ll find many websites will list it as “PMS on steroids”. While it’s a good choice of illustration for those who don’t experience, it doesn’t come close to clarifying what it does or is.

PMDD affects everything. It hinders your emotional sense. It triggers excruciating pain that is similar to labor or worse. Some women have to remain in a dark room (migraine pain) with some kind of heating pad, in addition to the heavy-duty pain relieve they have in their system. That may sound like a lot. Going through it is far worse.

Some people with PMDD, (women get PMDD so it’s not people, it’s women) they find themselves sitting in a depressive state, combined with all of that pain, for weeks out of every month. It is truly debilitating when you can’t even move to go to the bathroom because it hurts too much to think about it, let alone do it. It can keep a woman from her job, from her family, and her peace of mind.

Diagnosis of PMDD typically takes two things – One, you need to track your symptoms for 2-3 months; Two, you need to have a doctor rule out any other possible problems.

Self-harm or plans to self-harm

Bearing in mind that 3 to 5 percent of every woman who endures PMDD has thoughts of suicide, this condition is very difficult.  Of that number, many women don’t survive. At one point I was sure I would be one of those. As serious as this condition can be, you would imagine that doctors know all about it, but they don’t. There are few doctors who know about it and even fewer that know how to treat it.

Diet can change the regular monthly battle. Eating the right foods and exercising helps to mitigate the symptoms. If you’re catching it early enough, that might be all you need. If it is severe it may take medicine as well. Typically doctors suggest an SSRI for PMDD. This can be taken during the last two weeks before bleeding begins. That’s when the emotional and physical symptoms are at their worst. The anti-depressant will counteract the emotional chaos within and bring you back to yourself when it is needed.

This article is getting longer than I expected it would. I really conveyed all of that to tell you that I am overcoming it every single day and doing better each time I do. This beast will not hold me back. 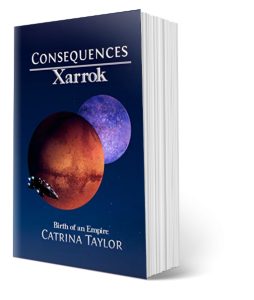 A short note about books:

I’m working on the newest in the Xarrok universe – Xarrok Legacy book 1. Excerpts to come – watch the blog for the sneak peeks.

I’m also working on a book dedicated to PMDD and enlightening /educating others about it.

There is extensive work that will be done with the former Knights of the Immortals. It will be redeveloped into Knights of Atlantis. I can’t wait to share it with you.

Tell me, what are your favorite ways to lift your own mood when life is challenging?